Like many other days since insurgency took its hold on Nigeria amidst other lingering security challenges, November 4, 2016 was a very sad day. It was the day the Nigerian Army lost Lt.-Col. Muhammad Abu-Ali and his men to Boko Haram ambush in the northeast, including Sergeants Muazu Ibrahim, Bassey Okon, Hussani Jafaru, Cpl. Chukwu Simon, Private Salisu Lawal and Seaman Patrick Paul.

Until then, most Nigerians hardly appreciated or paid attention to the sacrifices being made by families of soldiers and other uniform men who die in the line of duty, children whose fathers never came back home, and widows who sit up in tears through the long nights, wishing their ordeal was only a bad dream.

Abu-Ali was a lion-heart soldier whose dread caused panic in the enemy camp, his family, wife and little kids looked forward to when he would be done at the trenches and return into their arms. Alas!, that day never came.

Like a good commander, he died in his boots along with his best men, parting the curtains to expose the grim travails of families of security operatives who die in the line of duty.

Many soldiers of equal and greater valour have died before them in the same quest, many have died after, and many will still die in the line of duty; not only in the Army, but also in the Navy, Air Force, Police, Civil Defence, Immigration, Customs, NDLEA and Correctional Service.

They die chasing terrorists in the North, militants in the Niger Delta, armed robbers in the highways, pipeline vandals in the creeks, illegal immigrants at the borders and drug lords in our streets. And when they die, the world forgets about them and their families.

Plunged into the unexpected, the dependents are ushered into another phase of life, a life of struggle, lack and poverty. Sometimes the wives too die of heartache, and the children become orphans, dragging on through life without the world lifting a finger. 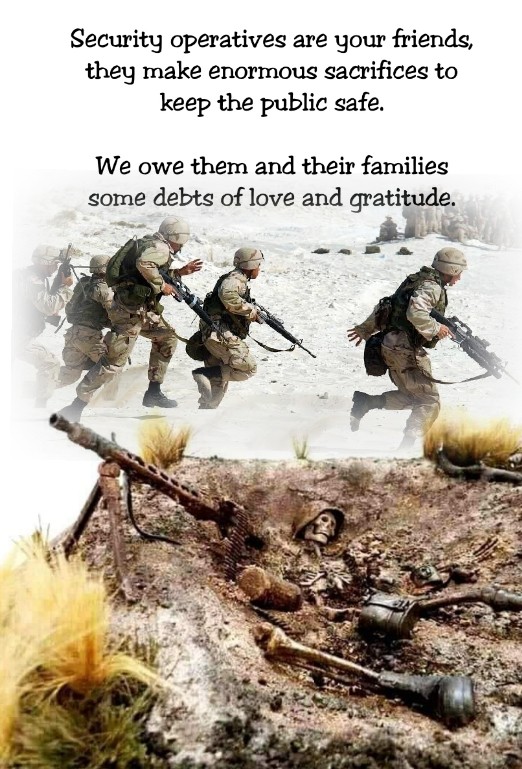 While the founder of this Foundation was always drawn to charity from his youth, particularly to orphans and the fatherless,…like many, he also hardly appreciated the stark realities of the travails of the dependents of those who die in the line of duty until he joined one of the armed services of the Federation sometimes in 2010.

Then came November 22, 2016, barely three weeks after terrorists killed Abu-Ali and his men,….militants in Port Harcourt murdered 4 NSCDC operatives in cold blood while protecting the pipelines. Their corpses were brought to the command fresh and dripping. It was a black day. The anguish boldly written on the faces of their families needed no telling, and reminded the founder of what they would soon be going through.

Condolence visits were paid to the families by the helmsman, partly to commiserate with them, and also to boost the morale of those who are still holding the lines. At their burial in the military cemetery, Abuja, the Chief of Army Staff, T.Y. BURATAI had the following to say:

“These men epitomise the best of our military. They exemplified the values of our nation and our military, with their loyalty, discipline, courage selfless service, respect, honour and dignity. They left behind wives, children, as well as parents and dependants….Your loved ones will remain in our care and their welfare will be of utmost priority at all times”.

These were reassuring and comforting words from the helmsman, but it was crystal clear that more needed to be done.

To promote renewed patriotism and gallantry in the ranks,…there was need for reassurance. A reassurance that no families of these veterans and heroes will suffer ever after as a direct consequence of their loss.

There was need for FOUNDATION FOR FAMILIES OF FALLEN SERVICEMEN.

And then, the Foundation was born, with men of vision, passion and integrity at the helm, who would ensure that all resources and goodwill accruing towards the welfare of these families are judiciously applied, with robust plans set to ensure that the families of the fallen never feel neglected again.